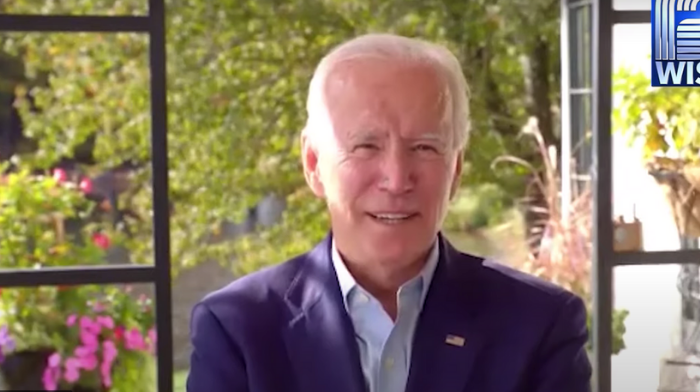 Biden told Milwaukee’s WISN 12 News that the claims are a “last-ditch effort in this desperate campaign to smear me and my family.”

RELATED: The Closer The Election Gets, The More Desperate The Media Will Become

Biden: ‘There’s No Basis To This’

WISN reporter Adrienne Pedersen asked Biden, “So, Wisconsin’s Republican Sen., Ron Johnson, put out a statement, on Homeland Security letterhead, saying Hunter Biden, together with other Biden family members, profited off the Biden name. Is there any legitimacy to Sen. Johnson’s claims?”

“None whatsoever,” Biden snapped back.

“This is the same garbage Rudy Giuliani, Trump’s henchman — it’s the last-ditch effort in this desperate campaign to smear me and my family,” Biden insisted.

The Democratic presidential nominee continued, “Even the man who served with him on that committee, the former nominee for the Republican Party, said there’s no basis to this, and…the vast majority of the intelligence people have come out and said, there’s no basis at all.”

“Ron should be ashamed of himself,” Biden said, referring to Sen. Johnson.

Funny. By social media rushing to save Joe Biden with the NY Post Hunter story. By them censoring and locking out accounts, suspending accounts over it, they actually made the story 10x bigger than it would’ve been had they just left it alone

The emails alleged to have come from Hunter Biden’s laptop appear to indicate Joe Biden might have been more involved in son Hunter’s foreign business dealings than he has let on.

For their part, the Biden team continue to dismiss the claims.

Much of the major national media seems content to take Joe’s word for it.

Neither the Democrats nor the mainstream media has offered any evidence for that assertion.

“It is funny that some of the people that complain the most about intelligence being politicized are the ones politicizing intelligence,” Ratcliffe said on Fox Business with Maria Bartiromo.

It’s almost like Adam Schiff, the Dems & the media are all repeating false propaganda about “Russian disinfo” w/ ZERO EVIDENCE, to hide Joe Biden’s corruption from the American people.

“Hunter Biden’s laptop is NOT part of some Russian disinformation campaign.” – @DNI_Ratcliffe pic.twitter.com/BTuDo5uQC9

He continued, “And unfortunately, in this case, it is Adam Schiff, the chairman of the House Intelligence Committee, who, as you pointed out, said on Friday the intelligence community believes that Hunter Biden’s laptop and the emails on it are part of some Russian disinformation campaign.”

“Let me be clear: The intelligence community doesn’t believe that because there is no intelligence that supports that,” the DNI said.

“We have shared no intelligence with Chairman Adam Schiff or any other member of Congress that Hunter Biden’s laptop is part of some Russian disinformation campaign.”

On Tuesday, the Department of Justice and FBI reportedly agreed that the emails were were not “Russian disinformation.”

‘I was chained for 11 months’: Living with depression in Liberia