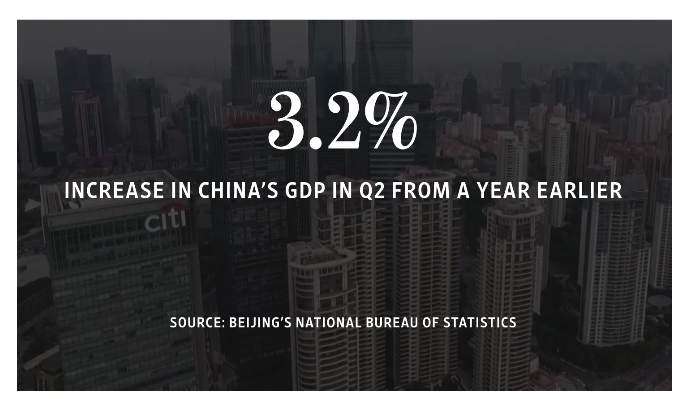 On Thursday, China said its economy grew 3.2% from a year earlier in the second quarter, as authorities benefited from an aggressive campaign to eradicate the virus within its borders.

In sequential terms, China’s second-quarter growth in gross domestic product represented a 11.5% rebound from the first three months of the year, according to data released by Beijing’s National Bureau of Statistics. For the entire first six months of the year, China’s economy contracted just 1.6% when compared with the first half of 2019.The growth figure for the second quarter beat a median estimate from economists for 2.6% growth and was at the top end of an unusually wide range of forecasts, from a contraction of 3.1% to growth of 3.5%. It followed a historic 6.8% contraction in the first three months of the year, when Beijing shut down the country in late January as the coronavirus spread across China from the central city of Wuhan.

Not What It Seems

Michael Pettis at China Financial Markets has a different take in a Tweet Thread.

Behind the Recovery, China’s Economy is Wobbling

Point 7 above refers to the Financial Times article Behind the Recovery, China’s Economy is Wobbling.

China’s allegedly solid rebound took a Herculean effort and more state debt, the same tools as always. Anderlini reports that investment by state-owned enterprises in the first half of the year rose by 2.1%, while investment by private companies fell by 7.3 %.

His conclusion is amusing.

It is not just China. So, let’s correct point 2 so that it is more accurate.

The global economy is like a bicycle laden with enormous boxes of debt ridden by drunken central bankers hoping to stuff more debt into the boxes despite the debt deflation consequences of their actions.

Walmart, Kroger To Require Face Masks In All Stores

Officer challenges official account of rout against US protesters

Yet Another Fed President Supports More Free Money and a…

MBS Market Dysfunctions in the Time of COVID-19