The Cleveland Fed released the median CPI and the trimmed-mean CPI this morning:

According to the Federal Reserve Bank of Cleveland, the median Consumer Price Index rose 0.1% December. The 16% trimmed-mean Consumer Price Index rose 0.2% in December. “The median CPI and 16% trimmed-mean CPI are measures of core inflation calculated by the Federal Reserve Bank of Cleveland based on data released in the Bureau of Labor Statistics’ (BLS) monthly CPI report”.

Note: The Cleveland Fed released the median CPI details for December here. Motor fuel was up 161% annualized in December. 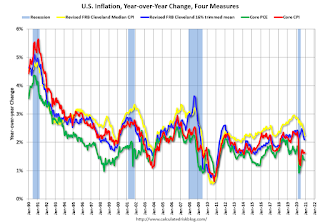 Overall inflation will not be a concern during the crisis.

Important Note: We will likely see some year-over-year jumps in some measures of inflation, since we saw some deflation in 2020. For example, we saw negative Month-to-month (MoM) core CPI and CPI readings in March, April and May 2020. Assuming positive readings in those months in 2021, the YoY change in CPI and core CPI will jump.

We also saw negative MoM PCE and core PCE reading in March and April 2020.  Ignore a jump in YoY inflation in March, April and May!

How Much Will China’s Growth Stumble in 2021?