Clock Just Ran Out on $600 in Weekly Unemployment Benefits 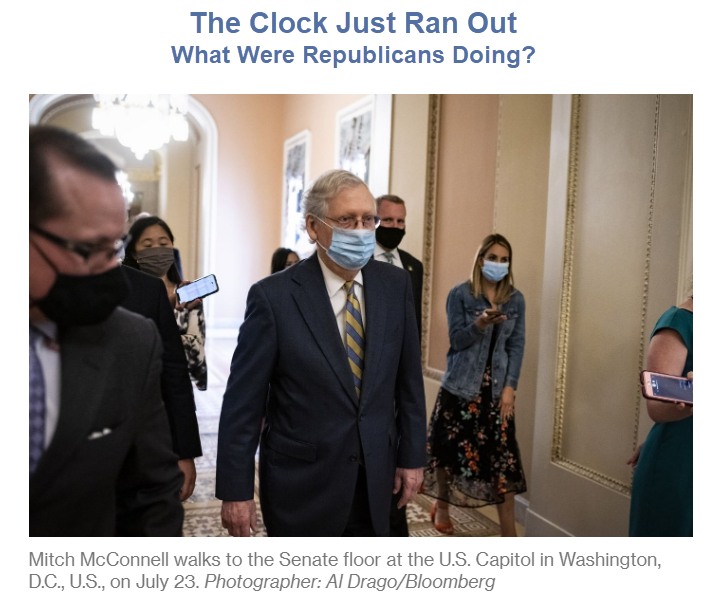 Q: What were Republicans doing?

A: Discussing alligator sausage and Louisiana, not a Covid package.

This story sounds like it is straight from The Onion, but it isn’t.

Race Against the Clock

It’s a time crunch of their own making. Republicans and Trump squabbled all week over the details of the plan, forcing McConnell to delay the release of the GOP proposal until Monday. That gives Congress almost no time to avoid a lapse in the unemployment aid.

The expiration is now less of an inducement to get Democrats to the negotiating table than a potential albatross they will try to drape around the necks of endangered Senate Republicans.

Treasury Secretary Steven Mnuchin touted a “fundamental agreement” among Republicans on a package of spending and tax cuts, and some Republican senators said they were expecting to see bills released as soon as Thursday. When it was clear that wasn’t going to happen, they waited for details at lunch.

Instead, they got alligator sausages courtesy of Louisiana Senator John Kennedy and little more.

“We talked about Louisiana and alligators,” South Dakota Republican Senator Mike Rounds said. “Honestly. We say, ‘Mitch what do you got?’ And he said, ‘We’re working on it. Not much to report yet, but we’re working on it.’”

Ron Johnson, a Wisconsin Republican who opposes the stimulus plan, said after the lunch that “We just found out that we weren’t going to find anything out.” Senators left Washington for the weekend with no bill text and plenty of details still to iron out.

The Bloomberg article is wrong about one key thing. The clock is not about to run out. Rather, it just did.

On July 23, I commented Over 30 Million People About to Lose $ 600 in Unemployment Benefits

The last full week in July ends Saturday July 25 for most state UI programs. And that is when the benefits expire, not July 31.

Rubio proposes taking up the lapse in insurance “by the first week in August.”

That would be too late.

The Senate can and likely will backdate a new unemployment package, but states will have to make a lot of programming changes to make that happen.

This will cause delays which Democrats will blame on Republicans.

And if the Republicans put in a means test as expected, that will cause even more delays.

Democrats Favored to Win the Senate

Earlier today I commented, Democrats Favored to Win the Senate.

This story will not help the Republican cause. Please click on the above link for details.

Trump Will Lose to Biden

For analysis of why Trump will lose to Biden, please see Only 13 Percent of Voters are Still Undecided

Republican bickering over alligators can easily turn things into a Democrat tidal wave.

Steph & Ayesha Curry Enjoy A Romantic Weekend Out In The Water: ‘I Love My Bay Be’ — See Pics

Colombian guerrillas are using coronavirus curfews to expand their control

Portland Protest(video)- ‘Our Land Is Now A Battlefield’

Key Words: Fauci doubles down on criticism of White House coronavirus response as…

How COVID-19 Raced Through a Georgia Summer Camp

Who Is Laycon, BBNaija’s Diamond In The Rough?

Kandi Burruss Hires Dancers to Perform in Glass Boxes for…

Dustin May blowing up for Dodgers, but here’s why Red…

Hull and Hall hunting down Hewson

Mandatory masks to be required on all Metro Vancouver…

After Beirut blasts, the race to save lives outweighs…

Health officials to give coronavirus update as new cases…

What To Watch For In Tennessee’s Primary

Prev Next 1 of 52
Subscribe to our newsletter
Sign up here to get the latest news, updates and special offers delivered directly to your inbox.
You can unsubscribe at any time
More Stories

MBS Market Dysfunctions in the Time of COVID-19