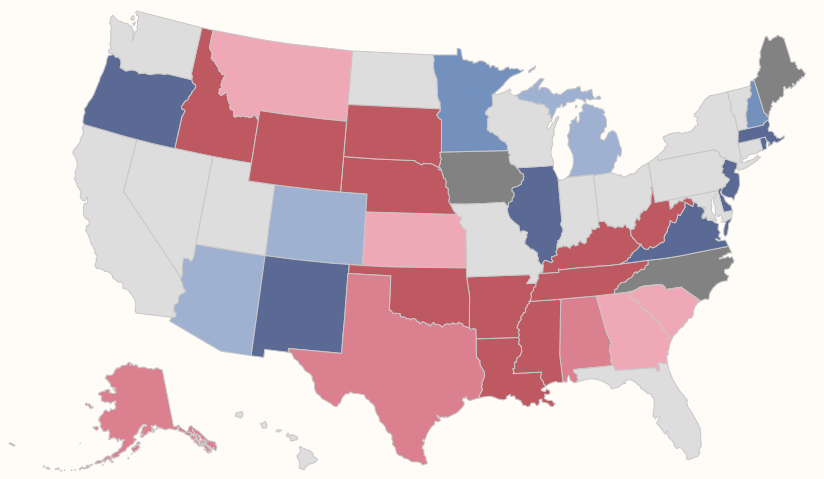 If this was, say, the 1980s or 1990s, allegations like these could have seriously derailed Cunningham’s candidacy. Today, this doesn’t seem like the kind of thing to break through the media clutter, and even if it did, it seems rather tame compared with who’s currently in the White House. The polls that have come out since the story broke have shown almost no change in the race: after being up by an average of 7 last week, Cunningham has fallen all the way down to being up by an average of 6 this week.

The five polls that came out this week ranged from Cunningham being down by 1 (this was the first poll since this summer that had Cunningham losing, but it’s a pollster—East Carolina University—that has routinely given him some of his worst results and their previous poll from a month ago had the race tied) to Cunningham up by 11 (from Data for Progress). Taken together, those five polls work out to an average margin of Cunningham +5. We will, of course, continue to keep a close eye on this race to see if this story causes a slow erosion, but it seems to have very little of a short-term effect.

Meanwhile, one race where no major events have shaken anything up, but where there’s a noticeably positive trajectory, is in Iowa. The last week saw several more polls added to the pile that have Democratic challenger Theresa Greenfield leading GOP incumbent Joni Ernst by mid-single digits, and Greenfield’s lead on average is now up to 4 points in our trendlines.

There was a period for most of September where Ernst was leading in our poll averages here, but that’s mostly just because there weren’t any new polls at all in that period and a Fox News poll from early September that had Ernst up 5 was weighing heavily in our averages. That, however, was the last poll to have Ernst in the lead, with seven more polls since then with Greenfield in the lead (and one with a tied race). Ernst, and Thom Tillis in North Carolina, both seem to be examples of how wave elections can distort our thinking; what initially looked like savvy campaigning in 2014 mostly just turned out to be them getting lucky in terms of what year they ran in. A year like this one where the tide is running in the totally opposite direction exposes that there was nothing unusual about them, and they’re just as subject to the vagaries of swing states as anyone else is.

One other race that was causing some concern for people last week was Michigan, where Democratic incumbent Gary Peters was leading Republican John James by only 2 points in our averages. This week, as expected, he’s back to a 5 point lead in our averages. The narrow gap was largely because two polls from Republican pollster Trafalgar were dominating the chart; this week, a number of polls from nonpartisan pollsters have been added (showing leads ranging between 5 and 10), drowning out the GOP’s attempts to flood the zone with internal polls here. Again, here’s a prime example of how a notable change in the averages in a race often isn’t because anything in particular “happened;” it just has to do with which pollsters are issuing results in a particular week.

With the Senate situation more or less in stasis, let’s also take a brief look at the gubernatorial averages, which we’ve spent very little time on this year, largely because there are so few competitive races. A few things have happened in the last few weeks, however, that deserve a mention:

For one thing, the most interesting race (or let’s just say the only race that’s within single digits), which used to be Montana, has been supplanted by a different one: the gubernatorial race in Missouri, where Democrat Nicole Galloway is drawing much closer to appointed Republican incumbent Mike Parson. That may have to do partly with Parson’s poor handling of the pandemic, but it may also have a lot to do with coattails, as what few polls we’ve seen of Missouri have shown it surprisingly close in the presidential race (probably not within reach for Joe Biden, but within single digits there too).

Meanwhile, the Montana race seems to be moving out of reach for the Democratic candidate, Lt. Governor Mike Cooney. This is an open seat being vacated by Democratic incumbent Steve Bullock (whose odds in the Montana Senate race have also seemed to deteriorate a little in the last few weeks, which is disappointing since a lot of pundits viewed Montana as potentially the crucial fourth pickup when Bullock jumped in the race), so that gives the Republicans their one potential flip among this year’s few gubernatorial races.

Finally, West Virginia wasn’t on the chart the last time we talked about governor’s races, because there literally hadn’t been any polls of the race until then. Since then, we’ve gotten several polls, and while they show Democratic candidate Ben Salango notably overperforming the state’s presidential lean, he doesn’t really appear to be in striking distance.

Strong Views and ‘Close to the Boss’: How U.S. Envoy Reshaped a Conflict