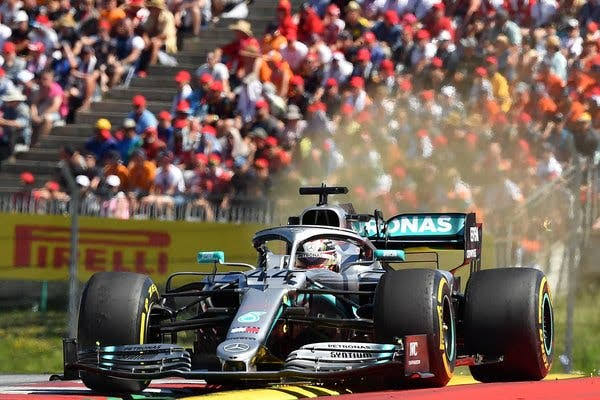 Formula One drivers delivered a more cohesive demonstration of the sport’s stance against racism on Sunday when they all lined up on the start-finish line ahead of the British Grand Prix.

After a rushed ceremony in Hungary two weeks earlier, Sunday’s organised showing saw seven drivers choosing to stand while the rest took a knee, facing back towards the grid in a solid unit.

Those who stood this time were Kevin Magnussen of Haas, the two Alfa Romeo drivers Antonio Giovinazzi and Kimi Raikkonen, Carlos Sainz of McLaren, Charles Leclerc of Ferrari, Daniil Kvyat of Alpha Tauri and Max Verstappen of Red Bull.

Before the demonstration, during which six-time world champion Lewis Hamilton wore a “black lives matter” t-shirt while the rest wore “end racism” t-shirts, a video was broadcast in which all of the drivers expressed their support for the sport’s anti-racism campaign.

The ceremony followed days of talks following criticism by Hamilton of the sport’s lack of leadership and cohesion in support of the global anti-racism campaign.

MUST READ: Body Cam Transcript Tells a Different Story on the Death of George Floyd

How Tacko Fall fared in Celtics’ scrimmage game vs. Rockets

Exclusive–Cotton: Google Suppression of Political News Critical of Democrats Is…

Dropped emissions during COVID-19 lockdown will do…