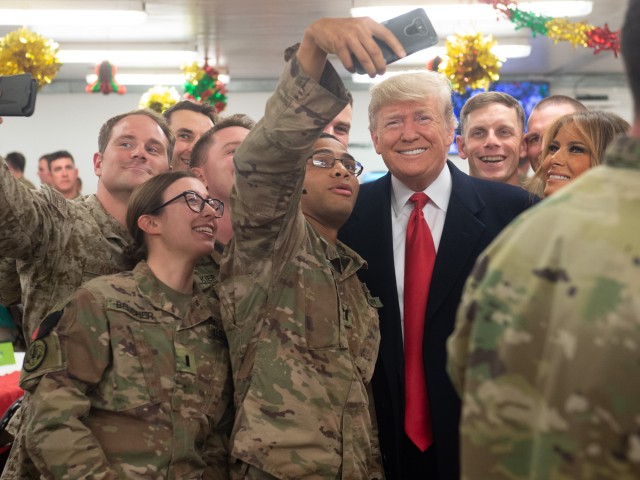 Nearly 800 military family members — including Gold Star families — have signed an open letter to voice their support for President Donald Trump, in the face of attacks in the mainstream media on his patriotism and care for the military.

Mr. President, there are hundreds of thousands of military spouses in this country who are forced into the silent majority. But we do support you. We do not believe the lies and rumors that others try hard to spread. We stand tall with you.

The letter’s signatories include Gold Star families, military spouses, military mothers, military sons and daughters, and veterans, according to the authors. The letter garnered more than 700 signatures in just three days, and has continued to collected more after the signature deadline, they said.

They said in a statement to Breitbart News accompanying the letter that they decided to write it after observing liberal military spouses appearing to speak out for all of them collectively. They said:

In the last few weeks, a false narrative has been perpetuated regarding the military community’s perception of its Commander in Chief. As conservative military Spouses, Veterans, and Family Members we refuse to remain silent in our ardent support for President Trump knowing that he holds the military community, of which we are a part, in great esteem.

Oftentimes those voices who are the loudest attempt to convince everyone they speak for all, but we are here to stand up and be counted amongst those who refuse to have our voices silenced.

Their letter reads in full as follows and is published below:

An Open Letter to our President

While the noise of the left may be deafening, we want you to know that support for you among military families and our community is not lost. Recent statements made, on behalf of military spouses, do not reflect us as a whole. While others may be quick to believe hearsay and rumors, we know that your actions over the past three years have spoken much louder than any anonymous words.

Your courage in dealing with world leaders makes our country a safer place to live. We believe that because of your leadership and our military, America is in a position of strength. You granted a pay raise – one of the biggest in decades – to our military men and women. You fought for our vets with reforms to the VA. You repealed the Widows Tax that Gold Star spouses fought to achieve for more than 40 years. You signed an Executive Order enhancing noncompetitive civil service appointments of military spouses. You signed another Executive Order for improvement of license portability for relocated military spouses.

You have personally honored so many of our military families. Military spouses under your leadership had the opportunity to interact with your administration and were treated with the utmost respect, dignity and enthusiasm to help achieve meaningful reforms. We have prayed as our service members left for war for the past 20 years. We applaud your leadership in working tirelessly to bring our loved ones home. Thank you for being present when so many of our fallen heroes have returned.

Like you, President Trump, we are fiercely loyal to our God, Soldiers, Sailors, Airmen, Marines, and Coastguardsmen serving our country. Your patriotism and love for America inspires us. We sleep better at night knowing that you will stop at nothing to protect the Constitution and those who defend it.

Mr. President, there are hundreds of thousands of military spouses in this country who are forced into the silent majority. But we do support you. We do not believe the lies and rumors that others try hard to spread. We stand tall with you.

We appreciate you supporting our freedoms, our military, our law enforcement officers, and our country. We cannot wait for your re-election. We had four years of your support and we look forward to four more years of having a Commander in Chief who loves and has a passion to lead our great nation.

An Open Letter to Our Presi… by Kristina Wong

Their letter follows an anonymously-sourced report in the Atlantic that claimed the president disparaged fallen service members.

Since that report, a number of veterans have come out to show their support for the president.

On September 5, nearly 700 veterans wrote that their support for Trump remains unwavering because of his record of supporting the military and ending foreign wars. Breitbart News also first published that letter.

President Trump responded to the open letter in a tweet: “Thank you! As we get closer and closer to the November 3rd Election, and as my poll numbers rocket up, the attacks get more and more vicious. I love our HEROES!”

Exclusive: Nearly 700 U.S. Veterans Issue Open Letter in Support of Trump https://t.co/IoKXU2a9EU via @BreitbartNews Thank you! As we get closer and closer to the November 3rd Election, and as my poll numbers rocket up, the attacks get more and more vicious. I love our HEROES!

Your scanner won’t work with Image Capture? Disable a network setting on your…

Ahead of US election, Europe eyes an ally in climate change fight

Christie Brinkley, 66, Goes ‘Swimming In The Rain’ In Black…

Mourinho must ruthlessly axe £30m Spurs ace on Sunday, he…

Next host of ‘Jeopardy!’? Who is Aaron Rodgers?

Yelp data shows 60% of business closures due to the…

Ocasio-Cortez and Her Media Ministry of Truth