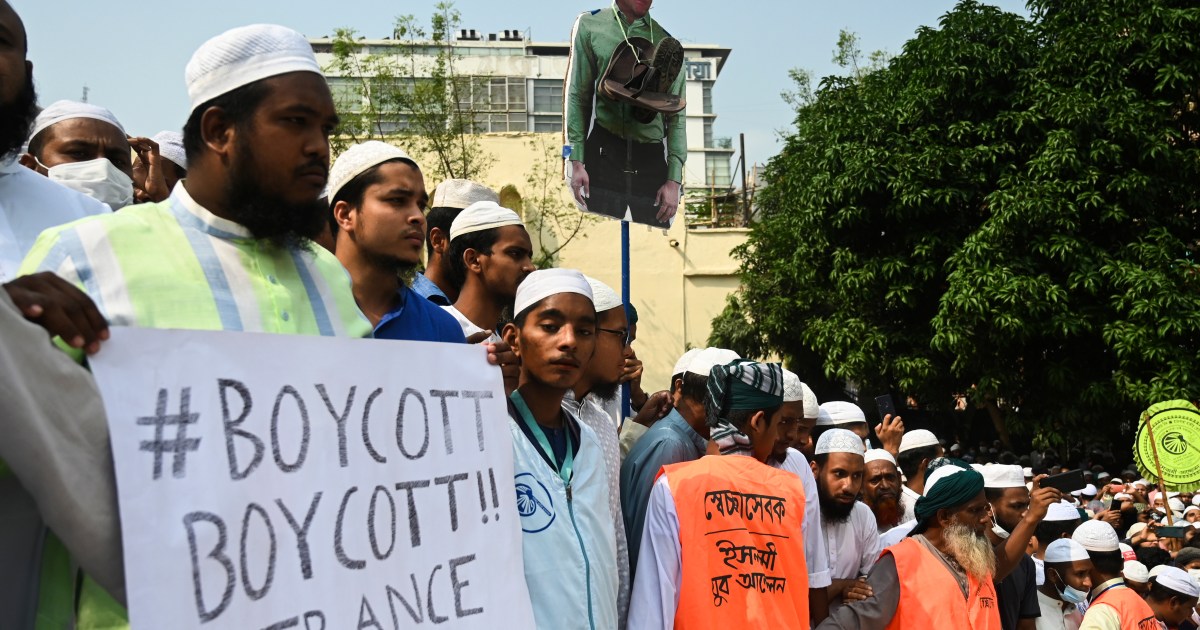 Tens of thousands protest in Dhaka, Saudi Arabia weighs in and Iran summons diplomat over France’s treatment of Islam.

54 mins ago – France tells its citizens in Muslim countries: Watch out for backlash

France has warned its citizens living or travelling in several Muslim-majority countries to take extra security precautions because of a surge of anger over caricatures of the Prophet Muhammad displayed in a French school.

French officials have said they will continue to support the right to show the caricatures after an 18-year-old student of Chechen origin killed Samuel Paty, a teacher who showed the images to his pupils as part of a civics lesson.

Tens of thousands of protesters marched through Dhaka, the Bangladesh capital, calling for a boycott of French products and burning an effigy of Macron after he defended caricatures depicting the Prophet Muhammad.

Police estimated that more than 40,000 people took part in the march, which was halted before it could get close to the French embassy.

Hundreds of officers used a barbed-wire barricade to stop the protesters, who dispersed peacefully.

A ministry official told the diplomat Iran strongly rejected “any insult and disrespect to the Prophet of Islam… and Islam’s pure values of Islam by any person regardless of their position”, according to local media.

4 hours ago – Saudi condemns attempts to ‘link Islam to terrorism’

Saudi Arabia has condemned caricatures of the Prophet Muhammad and any attempts to “link Islam with terrorism”.

However, the kingdom did not echo calls by other Muslim-majority countries for action against images being displayed in France of the Prophet.

A foreign ministry statement also said Saudi Arabia “condemns every terrorist act, whoever committed it”, in an apparent reference to the beheading of teacher Samuel Paty near Paris this month.

Hello. I’m Usaid Siddiqui in Doha, bringing you the latest updates on the backlash over French President Emmanuel Macron’s critique of Islam. Here’s a quick recap:

The fallout between France and the Muslim world continues on Tuesday.

A rift has widened after two events – the first was Emmanuel Macron’s speech on October 2 in which the French president said Islam was a religion in “crisis” across the world, as he sought support for a new bill to strengthen secularism laws.

The second event, the killing of teacher Samuel Paty, has led to further upset. While Muslims condemned the gruesome daylight beheading, the response from French officials had been perceived as linking Islam with “terrorism”. There are also fears of collective punishment.

Further, because Paty was killed after showing students caricatures of the Prophet Muhammad, officials including Macron have been defiant in saying these images would continue to be allowed as a matter of freedom of expression.

The prophet is deeply revered by Muslims and any kind of visual depiction is forbidden in Islam.

Over the weekend, Muslims called for a boycott of French goods, a move supported by President Turkish President Recep Tayyip Erdogan, who often clashes with Macron. There have also been several street protests across the Muslim world.

Some world leaders have criticised Macron’s treatment of Islam, while many in Europe stand by him.

Personal Finance Daily: The perils of waiting 10 days or more to get a COVID-19 test…

AstraZeneca vaccine up to 90% effective and easily…