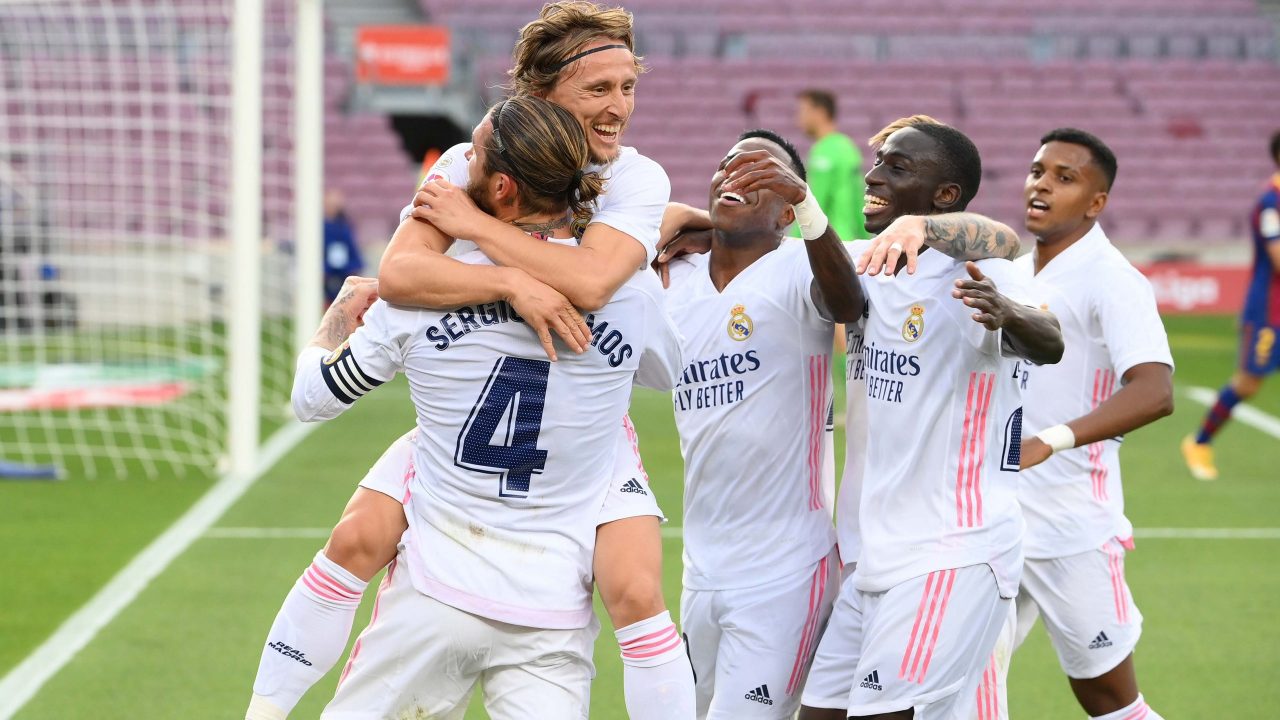 Real Madrid averted a crisis in the best possible way on Saturday by beating Barcelona 3-1 in the first empty Clasico, landing an early blow in La Liga’s title race.

Barca had the chance to inflict a third consecutive defeat on their rivals and increase the pressure on Zinedine Zidane.

Instead, Madrid’s win earns them a six-point lead over the Catalans, having played one game more.

Sergio Ramos’ penalty and a late Luka Modric goal finished off Barcelona after Federico Valverde and Ansu Fati had traded early strikes in a frantic game that defied those expecting further evidence of two heavyweights in decline.

Barcelona might feel hard done by, especially as Ramos’ penalty was awarded after a check by VAR and a hugely exaggerated fall by Madrid’s captain after Clement Lenglet tugged his shirt.

But aside from an impressive spell in the first half, when an inspired Lionel Messi threatened to win the game on his own, Madrid were dominant for longer spells and pulled away when it mattered.

This was Ronald Koeman’s first Clasico as Barcelona coach and some of the pressure Zidane would have felt from a loss is now transferred to the Dutchman, who has overseen only three wins from his first six games in charge.

Barcelona face Juventus on Wednesday in the Champions League, without the suspended Gerard Pique.

Every Barca set-back is now seen through the lens of Messi’s future too. The Argentinian, who failed in his attempt to leave last summer, has still to score from open play this season.

Mundo Deportivo had declared the match “The least Clasico of Clasicos” on its front page on Saturday morning.

In the previous week, Real Madrid had lost to Shakhtar Donestsk and newly promoted Cadiz, while Barcelona were beaten by Getafe last weekend

Yet a dip in quality does not have to mean a drop in drama and any doubts about the thrill of this fixture were answered in eight minutes, as both teams had scored.

Madrid made the start they dreamed of when Karim Benzema drifted deep into the right channel and was allowed to turn, with the sprinting Valverde going beyond him.

Valverde pierced the gap before lifting a curved shot past Neto and into the far corner.

Madrid celebrated as if their confidence had been reborn, but within three minutes, Barcelona were level.

Messi, from almost left-back, chipped a ball over the top freeing Jordi Alba who fired into the front post where Fati had nipped ahead of Ramos and turned in.

It was fast and open for the rest of the half, with Messi enjoying a golden spell. He glided past Casemiro and then swerved around Ramos, but onto his right foot, the finish stabbed into Thibaut Courtois at the near post.

Benzema should have scored too. Madrid finished the stronger before half-time but Barca were better after. Fati flashed just wide and Philippe Coutinho missed a free header at the back post.

Their momentum was checked by Lenglet’s error, a tug in the box clear enough that Ramos’ shirt was stretched, even if the fall was comically exaggerated. Referee Juan Martinez checked the monitor. Ramos found the corner.

Barca wanted a penalty themselves when Ramos booted a ball into team-mate Raphael Varane’s arm, but this time there was no whistle.

Ramos and Valverde both could have made it three in the final minutes before substitute Modric did, finishing beautifully after Neto rushed out.

The Croatian monastery you can rent

Can a nose-full of chicken antibodies ward off coronavirus infections?

How to Use, Enable, and Disable Fall Detection on Apple Watch