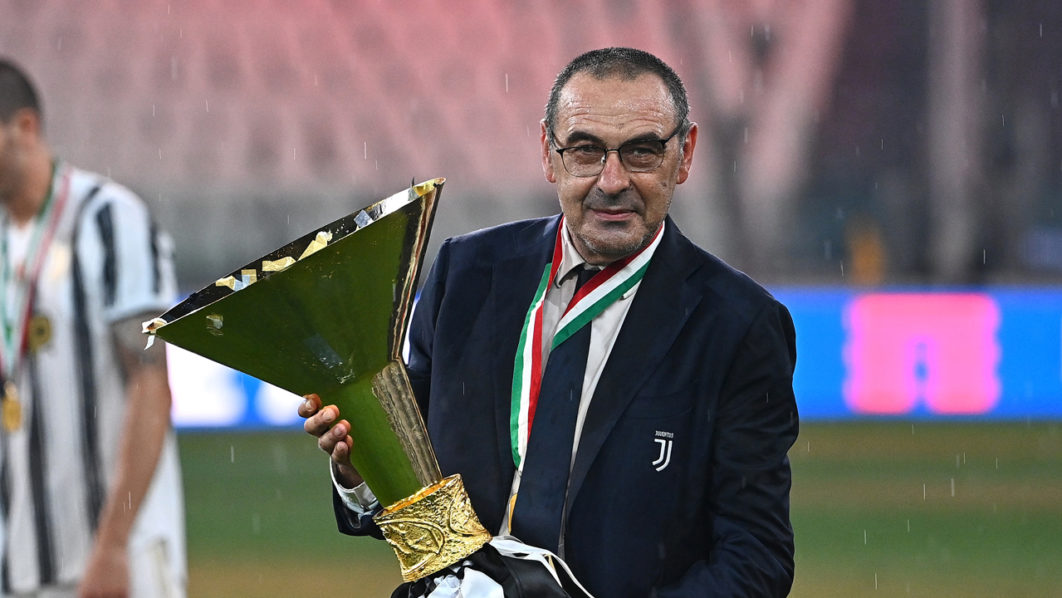 Juventus’ Italian head coach Maurizio Sarri holds the Champion’s trophy at the end of the Italian Serie A football match Juventus vs Roma on August 1, 2020 at the Allianz stadium in Turin, Italy. (Photo by Isabella BONOTTO / AFP)

Juventus coach Maurizio Sarri dismissed talk that his future would depend on the result of Friday’s Champions League last 16, second leg match against Lyon in Turin.

Juve trail the Ligue 1 side following their 1-0 defeat in France six months ago before the coronavirus lockdown.

“I don’t think my future is riding on this game,” said Sarri as Juventus look to keep their hopes of a first European title since 1996 on track.

“Thinking this way you make the club directors look like amateurs.

“I think I’m dealing with high level directors. They will decide whether to continue or to change. But it doesn’t depend on a single game.”

Juventus won a ninth league title in a row but have shown a dip in form after the coronavirus lockdown with just two wins in their last eight matches.

“We are happy to have won possibly the most difficult Serie A in history,” continued Sarri with matches played without fans in the Allianz Stadium.

“The away match was played with fans and the return without. That’s how it is,” said Sarri.

“A Champions League match without the public will not be pleasant.

“But the important thing is to get to Portugal and play the final eight as it would mean joining the world’s elite.”

Argentina forward Paulo Dybala remains uncertain with a thigh injury but Cristiano Ronaldo has been training “with intensity and strength,” said Sarri.

“We will try to recover Dybala up until tomorrow morning. At the moment he’s still training with the medical staff,” added the former Chelsea coach.

“Ronaldo is training in the right manner, yesterday he scored an excellent goal in training.

“He played many games in a short time, he rested a little and now he has trained with intensity and strength.”

iOS 14: How to use detailed cycling directions in Apple Maps

All of the Shocking Kevin Hart Facts 10 Things You…

Lakers’ Game 4 win over Nuggets came down to Denver…