“Was That A Fireball?”: Meteor Sighting Lights Up Japan Social Media 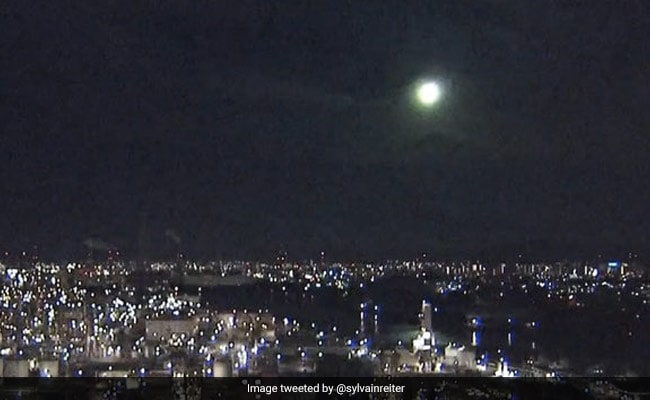 A fireball spotted falling from the night sky over parts of western and central Japan has lit up social media, with users sharing images of the unusually bright shooting star.

Local media said the fireball was believed to be a bolide, an extremely bright meteor that explodes in the atmosphere.

“We believe the last burst of light was as bright as the full moon,” Takeshi Inoue, director of the Akashi Municipal Planetarium, told Kyodo news agency.

The fireball was visible for just a few seconds in the early hours of Sunday, but was caught on cameras owned by national broadcaster NHK — which generally capture earthquake activity rather than extraterrestrial light shows.

“Fireball observed over Japan” – what is @SeenConnors up to? Just a few days there and already creating trouble with his football?! pic.twitter.com/WVCxPEpV9A

“The sky went bright for a moment and I felt strange because it couldn’t be lightning,” said one Twitter user who saw the fireball. “I felt the power of the universe!”

“Was that a fireball? I thought it was the end of the world…” said another, tweeting a video of the meteor captured while driving.

A similarly bright shooting star was spotted over Tokyo in July and later identified as a meteor, fragments of which were found in neighbouring Chiba prefecture.

(Except for the headline, this story has not been edited by NDTV staff and is published from a syndicated feed.)

In the Brazilian Amazon, a sharp drop in coronavirus sparks questions over collective…

Amazon Says Nearly 20,000 Of Its Employees Tested Positive For COVID-19

No Runway, No Problem: Taiwanese F-16s Can Land on Highways